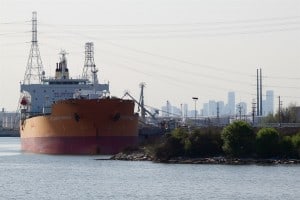 The Houston Ship Channel, one of the country’s busiest seaports, was left crippled and in a state of disarray following the spill of an estimated 168,000 gallons of crude oil. The spill occurred on March 22nd when a barge traveling through the channel slammed into the side of an oil-carrying cargo ship. While officials have since reopened the Houston Ship Channel to select “barge traffic,” the impact of the spill can be seen both in the water and on land.

When the incident initially occurred, officials were forced to close down all traffic through the Houston Ship Channel. Not only did this prevent cargo ships from making their delivery, but it also forced thousands of cruise line passengers to wait patiently until their ships could dock.

“Galveston Bay is one of America’s greatest estuaries and an important home to Texas seafood providers and recreational fishermen as well as the entry point to the Port of Houston. While the area has long dealt with many pollution concerns, this spill is significant,” Doug Rader researcher with the nonprofit organization Environmental Defense Fund.

Following the spill, cleanup crews immediately began deploying booms in an effort to contain the oil. While this kept the bulk of the spill isolated within the channel, there were reports of oil washing ashore on nearby beaches. High winds and turbulent waters are believed to have played a role in the oil’s movement, making it difficult for cleanup crews to contain.

While cleanup is still in the early phase, the impact of the massive oil spill is being seen and felt throughout the Houston area.  Officials have reported dozens of oil-soaked birds and wildlife, which is particularly troubling considering this is mating season for Houston’s bird populations. Oil-soaked fish have also washed ashore.

There’s some belief that closure of the Houston Ship Channel will result in higher gas prices — not only in Texas, but throughout the rest of the country as well. Many oil-carrying tankers are left waiting at the base of the channel until officials have cleaned up the spill and given them the green light for reentry.

“With this kind of oil, birds are mainly affected, it is the kind of oil that sticks. If birds land on it or walk through it, it gets stuck on them, but the oil doesn’t sink very much so it won’t affect the fish below it too much. The most immediate effects are felt by the birds, but possibly the marine mammals as well since they have to come up to the surface to breathe,” said Anna Armitage, professor at Texas A&M Galveston.

What Is a HAZCOM Plan? And What Should It Include?
OSHA's List of Top 10 Workplace Violations
Color-Code Your Spill Cleanup