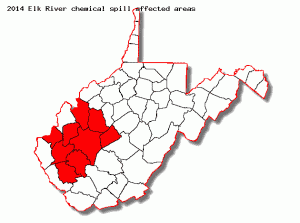 The Occupational Health and Safety Administration (OSHA) issued an $11,000 fine to the company responsible for the massive West Virginia chemical spill which left some 300,000 residents without access to clean water.

On January 9, 2014, approximately 7,5000 gallons of the coal-cleaning chemical crude D4-methylcyclohexanemethanol (MCH) leaked from a one-inch hole at the bottom of a storage tank owned and operated by Freedom Industries. The chemical traveled downhill where it eventually ended up in the Elk River — a primary source of water for nine counties in the Charleston and West Virginia metropolitan area.

It’s been 6 months since the incident occurred, but it looks like OSHA is finally cracking down on those responsible. Earlier this month, OSHA announced that it was citing Freedom Industries for failure to create a liquid-tight seal around its storage tank, imposing a $7,000 fine. In addition, OSHA also cited Freedom Industries for failure to provide standard railings on elevated platforms used to traverse across its storage tanks, imposing a $4,000 fine.

The January 9, 2014 chemical spill was one of the worst chemical spills in West Virginia’s history. Thankfully, there were no deaths attributed to the coal-cleaning chemical, but thousands of residents reported suffering from a wide range of adverse symptoms, including nausea and vomiting. Government officials continue to test the water in West Virginia’s Elk River to ensure it’s safe for public use and consumption.

The Centers For Disease Control and Prevention (CDC) recommends families maintain a minimum 3-day water supply per person for disasters such as the West Virginia chemical spill.

“Encouraging households to prepare a 3-day water supply for each person and pet in the Page 25 of 66 household would promote households taking an active role in the recovery process and help them become prepared for future disasters. The website Ready.gov recommends storing at least one gallon of water per person per day for drinking and sanitation; the website also details water preparedness recommendations for special populations,” wrote the CDC in its document titled, Disaster Response and Recovery Needs of Communities Affected by the Elk River Chemical Spill, West Virginia.

Of course, maintaining a 3-day water supply per person is a smart preventive measure for any family to take. Whether you live in West Virginia or not, there’s always a possibility of disaster striking without notice.

Chemical Absorbents 101: What You Should Know
Who Pays For Employees' Personal Protective Equipment (PPE)?
OSHA Guidelines For Storing Flammable Liquids