As the winter doldrums begin to recede, spring marks a new beginning and a transition to better weather and new growth. But unfortunately, spring isn’t all about flowers and sunshine.

As residual snow melts, powerful and often damaging stormwater runoff begins. Rising water can sometimes result in floor damage and water buildup in poorly drained areas can compromise the structural integrity of a building. Even if you live in an area that doesn’t see much snow, increased precipitation can cause similar unwanted effects if not handled properly.

Although tools such as spill containment berm dikes can divert liquids to more favorable paths and help prevent stromwater runoff damage to facilities, storm water can also pose a risk to the environment.

Known as “urban runoff,” water that comes into contact with pollutants from urban and suburban areas can pick up hazardous chemicals and become contaminated. If this water makes its way back to streams, lakes, or other bodies of water, it can harm wildlife, vegetation, and even foul drinking water. And that’s a big deal when it comes to Environmental Protection Agency (EPA) regulations.

Taking action to decrease your facility’s environmental impact is incredibly important, and doesn’t have to be hard. There are several precautions you can take to prevent stormwater runoff water pollution and damage to your facility. 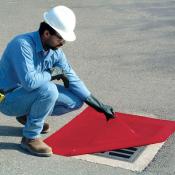 If oil does manage to spill into a storm drain or basin, you can reduce its negative effects with a passive oil skimmer. Float this absorbent polymer matrix on the surface of polluted water, and remove up to two gallons of oil at a time.

Alternatively, you can deploy a specialty oil-absorbent for marine applications such as a bilge boom, sock and net bag.

As we begin to see increased runoff, ensure your business is doing its part to create a healthy environment.

Travis has worked with spill containment products for over 20 years as a partner with PCI Products/AbsorbentsOnline.com. If you would like to know more about facility maintenance, absorbents, spill cleanup, spill containment or spill kits, contact me through absorbentsonline.com.